We had a big turnout for our destination ride from Rob Roy to Collingwood, with a number of folks, hiking, running and shopping, as well as the riders riding.  We started our epic journey just a little north west of the quaint town of Rob Roy.  Upon arrival, we determined that the wind was cold, and the trails were in great shape!!!

The ride begun, through a field and into the forest. From this point on we had a riot!!!  Trails were in the best shape for this type of ride, with a nice crust on the top, and a little dusting of snow to mute the sound of our tires rolling.  If that doesn’t give you a mental picture of the ride I don’t know what will….. 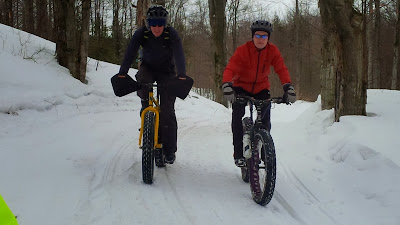 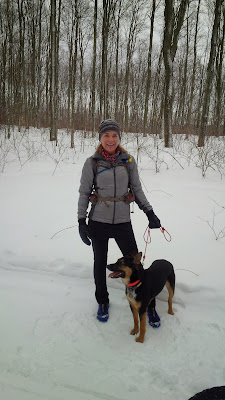 It took us a while to catch up to Karen running, but we did, and continued through the forest until our first road stint.  The road was a straight down a hill towards the next section of snowmobile trail.  The humming of tires created a sound of a tractor driving up the road. 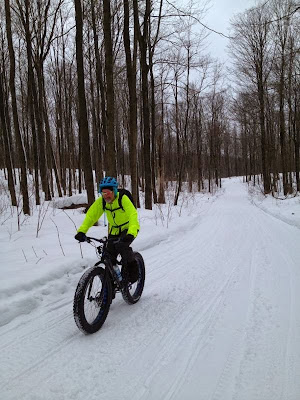 At this point of the ride, we had only encountered 2 snowmobiles and we were about 5km into the ride.  Also, by his point we were nice and warm, and well out of the wind.  We took a break at an intersection only to be caught again by Karen running…..  very disheartening…. 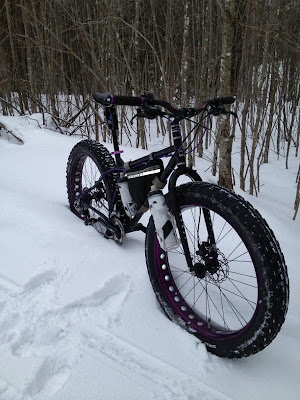 We continued along into the Pretty River Park also know as 3 stages.. This is where we had our first crazy fun downhill through the forest with burmed corners, and rollers.  The downhill felt so long, with tears rolling down your face from a mix of the speed and the constant laughing we finally reached the bottom, where there was a small creek.  The bike had their moment by the creek, and by this point Chris was sold on a Fat Bike. 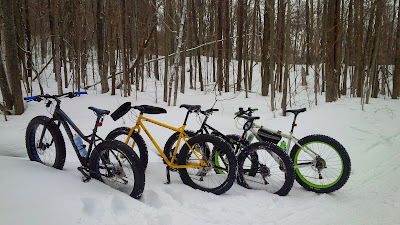 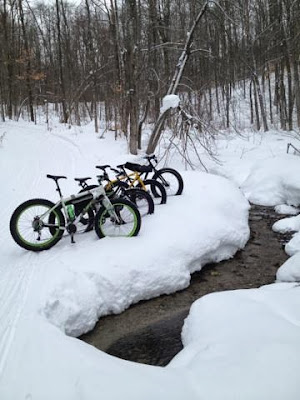 Chris was using a yellow Surly that was borrowed from Jeff at Cycling Elements in Orangeville.  Go check the store out if you have not been there.   cyclingelements.ca/‎ 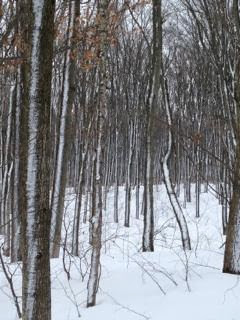 We then had to pedal our way back out from the bottom of the downhill…. Granny gear and away you go.  if you were cold before, you weren’t gonna be for long…. It was a long trudge up. 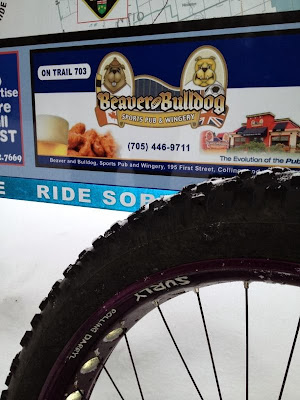 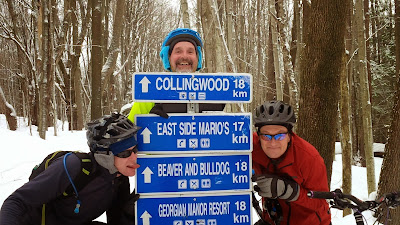 But when you get to the top, you then get to go back down.  We took a break at the top of the hill, caught our breath, had a quick snack and got passed by a sled.  The thought was that we could catch the sled.  Luckily we had a downhill.  Johnny caught him first, with Tyler not too far behind and catching near the bottom.  Unfortunately the rider never turned around to see the 2 bikes behind him.  We hit the bottom, and yup, had to climb back up. 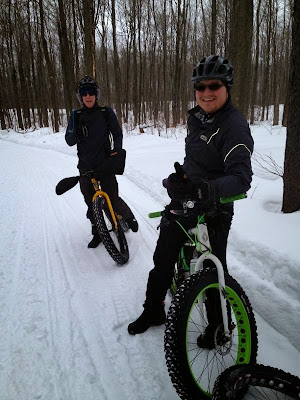 This climb was a bugger… we pretty much climbed up a stage and a half on the fat bikes…. But again, once we got to the top, we actually had more climbing to do… but we did eventually reach the summit… The summit being the upper parking lot of 3 stages. 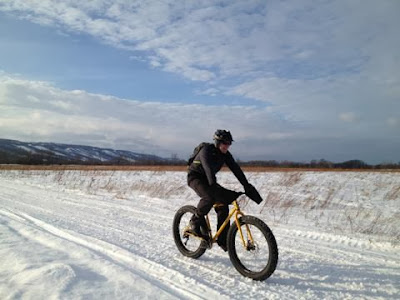 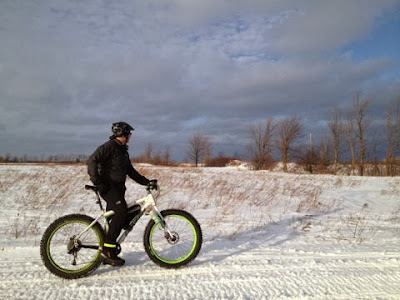 We had another downhill, and this one was way to much fun.  It took us down the road that you normally drive up to get to 3 stages.  This is where we hit our top speeds for the day.  Tyler clocked 56km/hr, and Chris 52.  Both respectable speeds I would think… especially when the recommend speed sign showed 40km/hr. 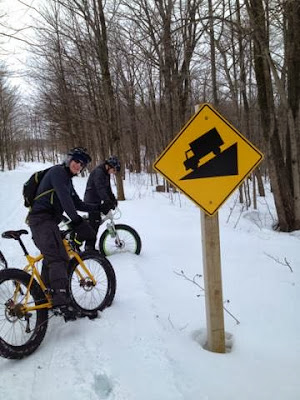 Once we finished the road section at the intersection of the 2nd line and Grey rd 19, we turned east and continued down the snowmobile trail which paralleled the highway.  This was one of the funnest downhill sections of the entire day!! I dont think we laughed so hard, or had bigger smiles on our faces.  The trail was filled with whoops sections and the snow pack was ideal.  Sure you hit a few soft sections, but they put you back in your place.  We also had to do a slight ditch crossing where the water was a little deeper than expected…. 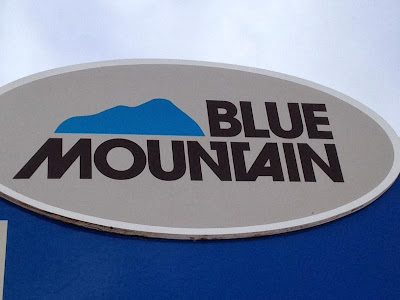 We hit the road for a section to meet up with Illona, Emily and Julie at the Blue Mountain village for a beer at the irish pub.  The bikes fit nicely in the ski rack, with a lot of people taking pictures of the fat bikes.  We finished our beers, then headed off to finish our journey. 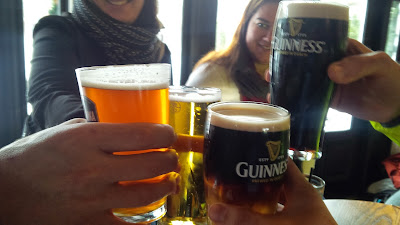 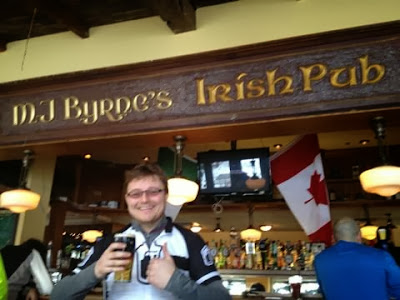 The home stretch of our ride brought us into the heart of Collingwood along the hiking trail which parallels the main street.  We finished our ride at the Beaver and Bulldog where everyone was waiting for us… we were a tad late i think…..

Our total distance covered was 34km, with a ride time of 2.5 hours. 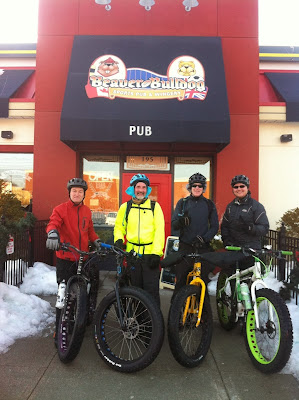 All in all the ride was way too much fun, and the plans are in the works for the next destination ride…. Maybe Meaford to Collingwood, or a Mansfield to Alliston, or anything in between. 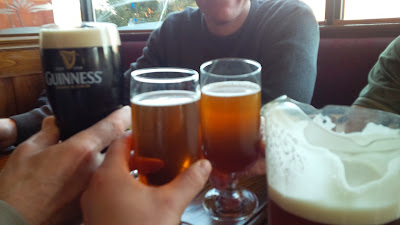 Comment of the Ride: “This is the most fun I have had on a bike” Chris after the final downhill of the day. 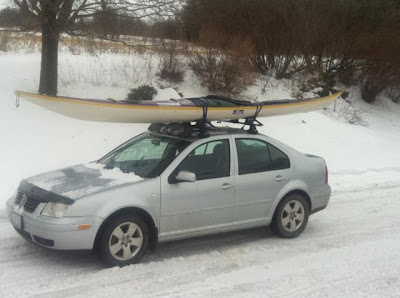 On a side note, Bernie was out Kayaking the same day.