Well folks, we are getting to the end of the fat tire riding!!! Tyler, Johnny, Ian, Bernie, Mike and Max rode, and Karen did a run.  Weather was perfect and the trails were in great shape!!! 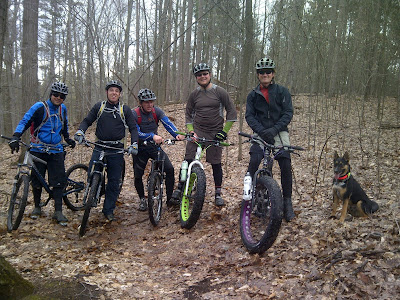 There was still a little bit of snow on the trails, but say less than 10% overall, and the 10% that was there was rideable for skinny and or fat tires.

We started on the stick, then headed to do Ken’s trail then Steve’s trail.  Both were in great shape.  It’s amazing how much you missed singletrack until you are leaning a fat bike around the corneres. 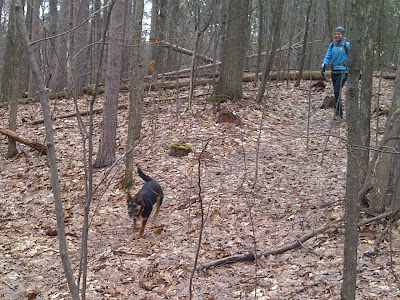 After the bottom of Steve’s trail we hi the trail to nowhere and then looped back into the lollypop.  Some new trees down on the trail to nowhere which are all completely rideable!!! Overall some debris and trail maintenance while we were riding, but nothing too crazy!!

We doubled back on the lollypop and hit some of the ridge trails, which again were in great shape! On the fat bikes, once you get them rolling on singletrack they get some sweet momentum and you can keep it rolling through a lot… 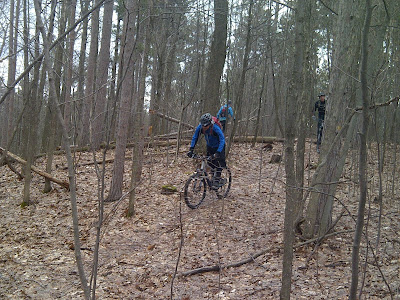 After a long season of riding, now being able to notice the difference from snow to dirt is worth the crap we went through this year. 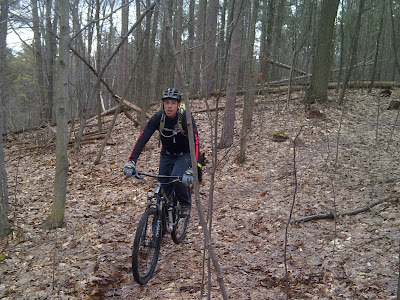 We finished the ride in fitting fashion, back to team van go’s clubhouse which we have now named it…. enjoyed some boneshaker in some other peoples glasses who weren’t there…. hmmm… it was tastey!!

Comment of the ride/day: Karen “once you go black you never go back” refering to the dark beer we were drinking at the pub…