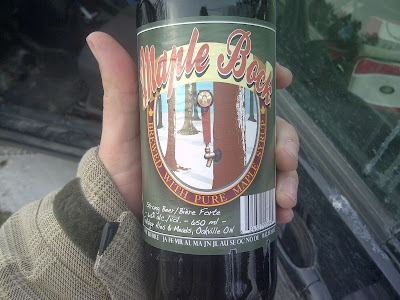 Not much else to do this time of the year other than have a nice refreshing beer.  Then write a review about it, so hence I need to keep trying different brews.  And this one was thanks to Don for supplying it after a ride this past Sunday.

The beer being reviewed is from Trafalgar Ales and Meads, and their Maple Bock Beer.  Pretty much the name states it all… it is a maple flavored beer… If you couldn’t figure that out, this may not be the right review for you. 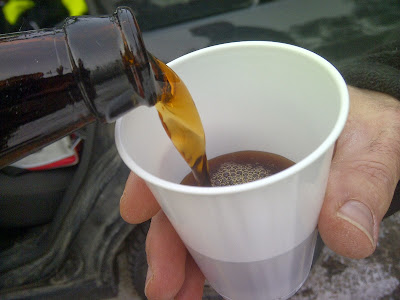 Let’s start with the visual aspect of the beer, or for the normal people what the beer looks like.  When poured into a glass, or a plastic cup in the parking lot, you can see by the picture that it is a dark beer.  One thing that I noticed was that there was a lot of floaties in the glass.  One note was that there was not a lot of carbonation in the beer.   As you can see in the picture there is not a lot of head.  Get you mind out of the gutter, as I’m talking about the foam on top of the beer.

Next the smell test.  After a winter bike ride your nose is plugged up a bit, and running, so smelling the beer was not very successful…

We move from the smell to the taste.  With a name like Maple Bock, you guessed it, it has a taste of maple.  To give you a judgement on the maple taste, picture yourself licking a maple tree, without the bark… maybe pretend that you are drinking the sap out of the tree, or out of an Aunt Jamima bottle.  Long story short there was a hint of maple in the beer.  Mixed in with the maple, was a malt and slight hops.

Would you buy a case of this beer?  I wouldn’t, but I would buy a bottle at a time.  I could not see drinking a case of it in 1 sitting….
Would you recommend this beer to a friend? I would, but like the above comment states only buy 1 bottle.  Or if you like maple syrup, then have at it.
Was the beer hoppy? Slight, but nothing like a boneshaker.
What is the average IQ of a person?  90 – 115 score.