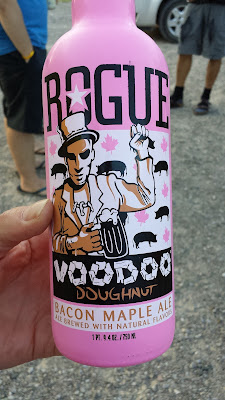 Good morning, good afternoon, and good evening, depending on when you are reading this.  Below you will read a story of trials, tribulations, action, and suspense.  Well not really, you will read about beer, and this review covers a beer that Johnny brought to a ride… Rogue’s Bacon Maple Ale.  Yup, Bacon and maple all wrapped up into a bottle and served in a glass…..

As you can imagine, the initial smell, well it’s bacon and maple smell… Think of a weekend morning, when you wake up to the smell of bacon, or if you are say at the Country Cabin, and you walk in and the first thing you typically smell is bacon.  Well thats what you smelt when you opened the beer, Bacon…

When you took the initial sip of the beer, your first thoughts went to breakfast…. then back to bacon, and maple.  you may think that would be a great idea, try the beer, you may have a different perspective when it’s all said and done.

Poured into a cup, you couldn’t really see the colour as the glass was opaque, but i could imagine that the beer looked like a beer, or like bacon…

At the end of the day, we had several taste testers, below are some of the comments… 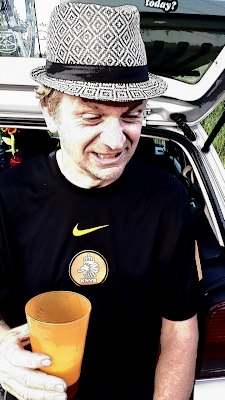 Would I buy a case of this beer: I would not… Unless they came in 1 packs, to other people wanted to try it, but once was enough for me.
Did it taste good: It did taste like bacon, but not good bacon….
What was your initial thought when you drank the beer:  eggs…. and bacon…
Was the beer Hoppy: I couldn’t really tell… i was more focused on the bacon maple flavor…

For anyone counting, the word bacon was in the write up 16 times!