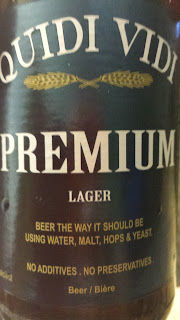 Well it is again time for another beer review…. Being in Newfoundland it just seems normal to be drinking an extreme amount of alcohol.   This time the review will cover another one of Quidi Vidi brewery beers, Premium Lager.

Based on our beer tasting the premium beer ws created to compete with the molson Canadians of the world. It does this but so so much better.

the appearance is semi light, sort of a mix of a light beer and an amber beer. Pretend you mix white and dark chocolate and it comes out milk chocolate, thats what the beer looks like.

Taste, its smooth.  Tastes like beer.  That is all. But honestly there is no real hop taste and it does taste very similar to a molson Canadian.

If you are a fan of Canadian than you would really enjoy this beer.

Would you buy a 6 pack: yes I would and did.  Personally I may buy a second case if I sober up enough to get another one.

Is it hoppy: nope not at all.