Yet again another installment of the team van go beer review.  This time the review covers Mad and Noisy’s new beer Sunny & Share.

This past Monday, Tyler, Emily, Karen and Johnny were in Toronto for the Mumford and Sons concert, which we drank before during and after the show.  When we arrived back at the Royal York hotel, we were going to have a night cap, and this was the beer of choice.

The appearance of the bottle is brown, with a cool label.  I must give them credit for the design cause it is neat, and the name is pretty cool as well with a play on words…..

To be honest, Creemore Brewery will probably not like this, but the label is the best part of the beer.  We poured it into 2 glasses, and struggled to drink it.  Personally I’m not a wheat drinker, or even citrus person for that matter, and after the glass, there was still some left in the bottle…. 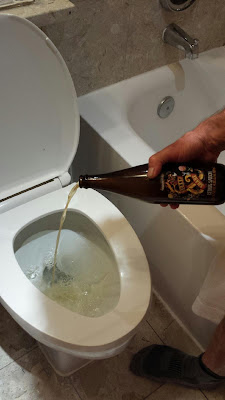 I think that picture describes what we thought of the beer.
Now, for anyone who enjoys wheat beers, this may be up your alley, but if you dont like wheats, I would recommend not purchasing this beer…. sorry creemore…
Rating: 0.5 out of 5 (I need to leave a buffer in the case of a worse beer, which I hope I do not come across..)
Would you buy a case of it: Nope… this one was free, and I’m happy for that.
Was the beer hoppy: Nope, Citrusy yes…
Would you recommend it to a friend: If I didn’t like the person yes I would….