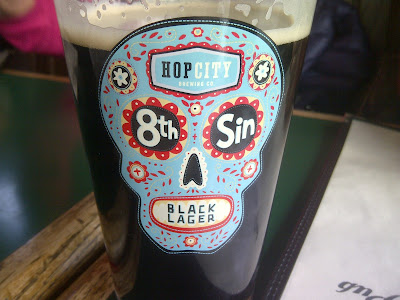 Another edition of the beer review… This time the beer review comes from the Pub in Creemore… They had a seasonal beer from Hop City. The beer was called 8th Sin, and was a dark lager. It was a perfect finish to the day of great riding…..

First Impressions…. The waitress that gave us the beer was good looking and she was holding our beer so the first impression was how much I liked her at that moment!

The beer came in a very cool glass, with the logo of the beer on it… a nice touch.  Inside the glass was the beer.  the beer was dark in appearance, with a small layer of dark head on it….

The smell was similar to that of the Muskoka Double chocolate cranberry stout…. it had a bit of a cocoa scent to it… oh yes cocoa….

The first sip of the beer was an interesting one… it wasn’t what i was expecting… the taste itself i would classify it between the Muskoka stout and a Kieths dark ale… there was a hint of hops to the taste as well but not overwhelming…. all in all I drank the entire beer, as it was cold and infront of me….. 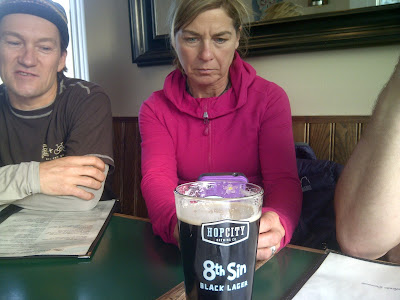 Would I buy a case of this beer: Yes but only a 6 pack… I could see myself being very gassy if I drank a whole case at one time…..
Did it taste good: Yes! It is beer mmmm.
What was your initial thought when you drank the beer: That I do enjoy drinking beer and sitting at a pub after a great ride with friends made it much better….
Was the beer Hoppy: There was a slight hop taste, but not overwhelming.
Score: 4.5 out of 5