It has been a little while since there has been a beer review, so I’ve decided to drink a few beer, reluctantly…. I have a lot of Grolsch at my disposal so hence I’m drinking it, and will write about the smooth smooth alcohol….

The beer at a nice chilled temperature is very smooth, not too much carbonation or anything like that… I would compare grolsch to an Amsterdam Stock or Organic ale.. had the same drinking characteristics…..

The beer smelt like beer…. that is all… nothing special on the smell… if it smelt like chocolate or something like that I would have a much different opinion on the smell, but it didn’t so i don’t……

The beer was nicely delivered by Em’s dad from Quebec, so it was cheaper than the average bear… I mean beer…. 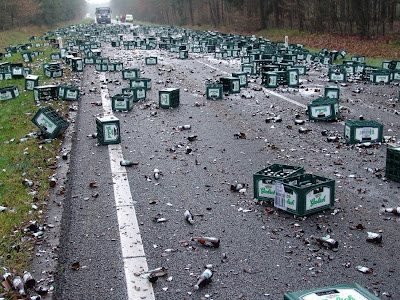 Would I buy a case of this beer: Yes…. I bought 2 cases of beer….
Did it taste good: Yes! If it didn’t I wouldn’t have bought 2 cases….
What was your initial thought when you drank the beer: it’s a good thing I bought 2 cases because it wont last long…..
Was the beer Hoppy: Not really hoppy at all…. just a very smooth beer.
Score: 4.2 out of 5