We had a great group come out and play at Bromont!!! Tyler, Emily, Bernie, Ann, Moe, Jeff, Chrissy, Johnny, Karen, Mark, Karin, Ralph, Wendy, Derek, Kyle, Jenny, Colby and Rylee took over part of Camping Fairmont, for the weekend.  Some arrived Friday the remaining Saturday, and the sh*# show began…. 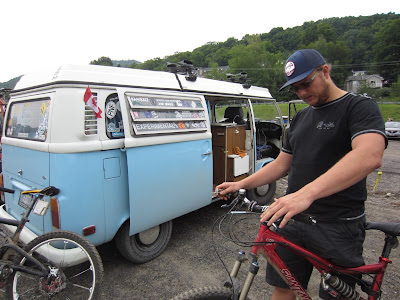 For anyone who hasn’t been to Bromont it is a great place for the entire family, some people can ride, as others sit at the very adult orientated water park, complete with Bar, and waterslides that you can try and flip each other out of tubes etc….

Day 1…. Our first day consisted of a bit of an eye opener to the world of downhill riding.  Please note that no one other then Kyle was on a bike really meant to go downhilling… most are on either all mountain or x-country… we decided to start with a green circle run… which turned out to be a lot more difficult than expected.  Ann, and Moe both had falls and others were not too thrilled with the run… We than changed to the other green circle run to break people in, which turned out to be a great 5km downhill ride… 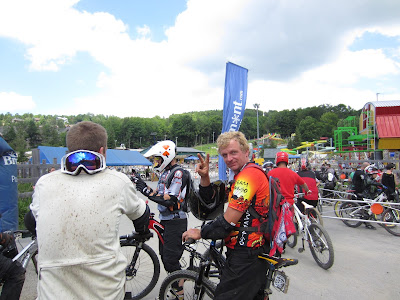 After the first run, everyone went off into different directions to conquer trails they wanted to, and some headed to the water park to sit and lounge… 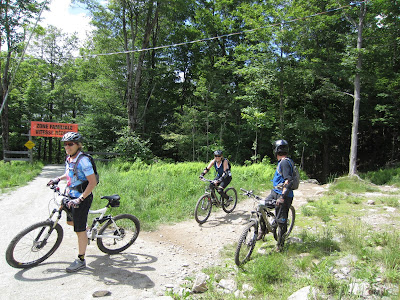 The end of the day was capped off with the “Bonfire” which was pretty much a wood pile about 8-10ft in the air, all stacked with firewood… while sitting around the fire, the fireworks began… hillbilly fireworks to be exact.  2 guys lighting them up over the pond, right beside their cars… great show for sure, by the end both in sync and finished the show with lighting up everything they had left.  After fireworks started music, with Ann and her guitar and a couple locals playing into the night… The night was a sign of things to come, drinking, music, and riding…. 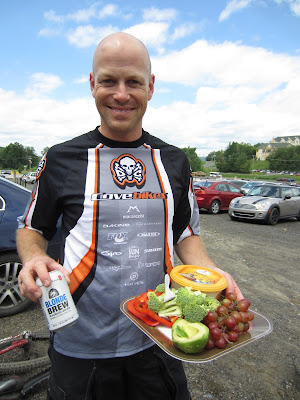 Day 2…. A great day with beautiful weather… Just like Saturday, the first run people tried to do a warm up… well most people… Johnny and Kyle raced each other top to bottom… everyone else warmed up… And then again, people split into their own sub groups and rode together… This day everyone seemed to become more comfortable with their riding, and start to push the limits more and more.. 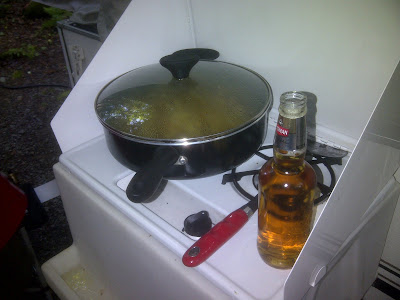 Kyle and Johnny headed over and biked down the slab…  Johnny making it, Kyle not so much…

The end of this day, everyone pretty much ended up in the water park acting like children… flipping each other out of tubes, trying to flip tubes going down water slides, getting in trouble by the life guards…..

Day 3… Our final day of riding/water parking… A few people left first thing in the morning, so we were down to Tyler, Emily, Derek, Ann, Moe, Jeff, Chirssy, Karen, Johnny, Bernie and Kyle.  Our final group did what seems to be the final for every trip.. end off with a bang. 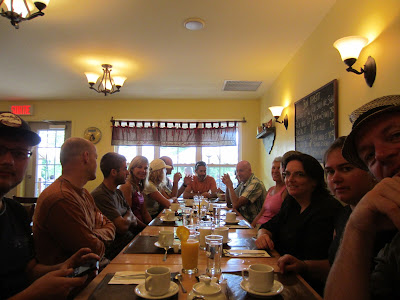 we started by heading to the hill first thing after breakfast and start with a red diamond run.  good way to warm up… then off to the slab… a giant hunk of rock to ride down.  Kyle busted a bolt on his bike prior to heading over so off to the water park to drink margaritas… On the slab, Derek took a bit of a tumble… to add insult to injury though the pads that were at the bottom to soften the fall, well he missed it landing on the rocks.  Tyler and Johnny headed up to try a double black diamond run.  The ride down was fun and interesting to say the least.  Some sections a complete riot, others interesting, others painful… 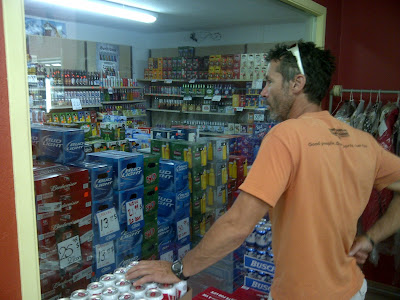 Finished the day off running number 6 top to bottom with Tyler Jeff and Johnny… Other than Jeff pulling a dirty pass on Tyler at the very end of the run, a great way to finish off the riding weekend, with no major injuries to speak of.

Off to the water park for drinks, and the precursor of the evening…. 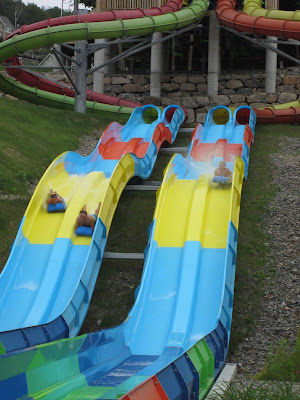 The remaining group decided to pull together a pot luck diner with Jeff manning the deep fryer.  Thank you to both Jeff and Chrissy for bringing the deep fryer and letting us throw whatever crap we could think of into it. 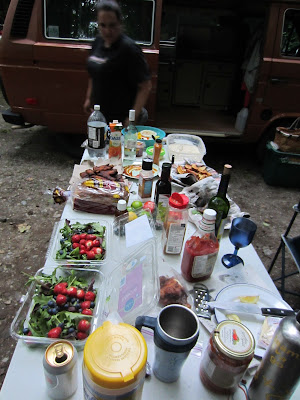 We were honored to listen to Ann and the Gritty Kitties play into the night, with guitar and ukulele music.  We did shoot some good videos to compile into a short film. 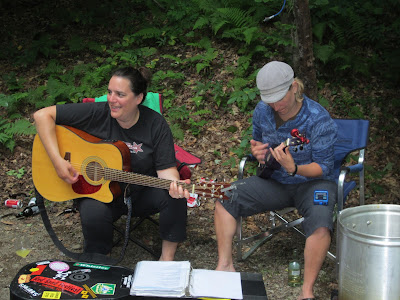 The fire and music went into the wee hours of the morning, with Jeff and Johnny dancing on the van, Johnny and Kyle climbing trees, and the Sound of Music playing. 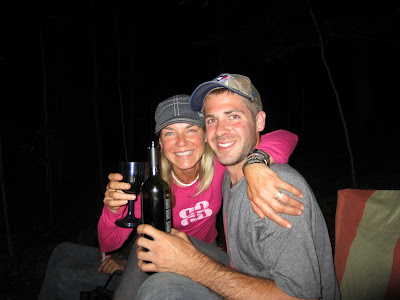 Day 4….  The trip home was another adventure… we had traffic updates from Derek, Moe and Ann, which helped us avoid any major issues that ways.  total travel time home for some of us was 10hrs…

For anyone who was on the trip, we are going to set up a Team Van Go, share point, so everyone can upload and download pictures videos etc.  This way we dont have to keep swapping memory cards, cd’s etc.  Once this is complete an email will go around with instructions on how to get to the site, etc.  You will have to probably create a login, but we will see what we can do.

Until Next years Bromont Trip…. I think we can almost be certain of another trip…