September 6th, 2017 by Tyler in Beer Reviews, Everything

As many of you out there may know, I enjoy beer, and well most of you reading this I would also assume enjoy beer.  We are in an age where there are so many new breweries popping up, and so many amazing new flavours to try, you start into a whirlwind of beers.  There are the IPA’s, APA’s, Pilsners, Golden Ales, Stouts and the list goes on and on and on.  Is this a bad list, not at all, because we as beer drinking folk and without beer we are normal folk.

One of these new up and coming breweries is based out of Parry Sound Ontario, Trestle Brewing Company.  You can check out their Facebook link below.

If you are not one of those Facebook type of folk and more of just the internet, which is on computers now.

Now if you are a person that doesn’t have the internet, well you wouldn’t be reading this in theory, but they have just recently broke ground on their brewery, so congratulations to them, it is really awesome to see another brewery starting up!

Well now we should get into some of the more important stuff, such as the beer itself cause really beer is what you are reading this for.

Trestle Brewing Company has released their Golden Ale, which as you can see by the below picture, is an Ale, and has the Golden colour to it.  If the colour was amber, I would assume it to be called an Amber Ale, but that is not the case, Golden it is and Golden it will stay. 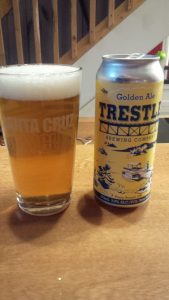 Now typically a Golden Ale would also be referred to as a Blonde ale, which in turn has more of a Lager trait to it.  A crisp, clean, balance flavour.   Have I confused you yet.   How bout some examples of similar beers if that helps out.

Yeah I had to include Labatt 50, cause really who here has never had a Labatt 50.  My point exactly!

The Golden Ale by Trestle Brewing Company does hit all the flavour notes of a typically golden/blonde ale.  The beer itself had a crisp taste, there was not a tonnes of hops or after taste, which is what you would expect from a Golden Ale.  There was a full balance between the hops and malt, so you do not get a big kick from either over the taste profile.  There was good flavour, slight hint of malt and hops, but nothing that punches you in the face like an IPA or Session Ale.

As you can tell by the photo above, and now that I have said that you are looking at the photo above, the colour is Golden, but you also have a nice clean white head to the beer.  The head lasted for a few minutes after pouring.

Overall, I did really enjoy the Golden ale, it is a perfect Summer, apres ride or really whenever beer. 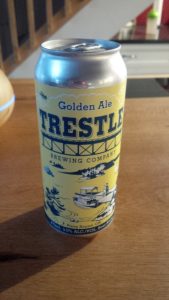 For anyone who is up in the Parry Sound area, pop in and check out Trestle Brewing company, follow them on Facebook, or their website to keep up to date on what is happening.

Like any new brewery, give them a try, you will find some amazing beers out there, if you just explore, and if you haven’t had Labatt 50, well need I say more.

Was the beer Hoppy:  Not overall hoppy, just a nice hop/malt tone

Would you recommend this to a friend:  Yup for sure I would, no doubt.

Would you buy a case of it:  As soon as it is on sale at the LCBO I will for sure.

Where Can I buy it at:  http://trestlecraftbeer.ca/news/where-to-buy/