As we begin to see the light at the end of the tunnel of winter, this turns us towards the warmer season of craft beer drinking.  With the new craft beers comes beer reviews, as they seem to go hand in hand. 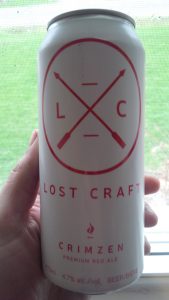 A short history on Lost Craft Brewery, based on their website.  Lost Craft is a Toronto Based craft beer company that focuses on brewing world class session style craft beer. We travel the globe to source beer styles from around the world to inspire our recipe development. We think global and drink local.

Now to the down and dirty of the review, the taste and all the other senses surrounding a beer that you may experience.

If you were so lucky to have a glass nearby and decided to have some class by pouring the beer into said glass, you would see a copper coloured beer infront of you.  The head on the beer was somewhat of a beige appearance.

As you drink the beer you will notice an array of flavours.  I had a mixture of grain, malt and a slight hit of bitterness, but overall very smooth.  There was a good amount of carbonation but no over powering flavours or hoppiness.  Overall a nice mouthful of beer for sure.

Overall, I found Crimzen to be a great red ale, pretty much what you would expect from a Red.  It has a simplistic overall flavour tone, which works out really well and I can see myself buying this beer again for sure.

Was the Beer hoppy:  Not really hoppy, more bitterness, but really good overall.

Would you buy the beer again:  For sure I would.

Why do you ask yourself questions at the end of the review:  Ummmmm… Next question.