A wise man once told me that you should savour every part of life and live it, enjoy it, and be yourself.  Well that bodes true to what we all enjoy, biking, being with family and friends and enjoying the odd beverage.

Over the last little bit, I must apologize, I sorta hit a block with doing longer posts or writing things, there must be a word for it… like there was a block in my mind.. oh well it will come to me, but a couple of weeks back while visiting Chak and Grace and having a great evening with dinner and drinks, I was offered a Goose Island Midway ISA.  I have personally never had one, so I had to jump at the chance and give it a whirl.

Goose Island Brewery is based out of Chicago, which is a small village south of the border.  They have been around since 1995, and have grown ever since building.  Some of you may be familiar with the Goose IPA which is a great IPA!

The interesting part of the Midway ISA is that it is actually brewed in Canada by Labatts. 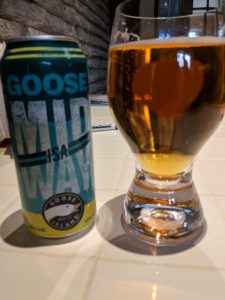 The great part about taking photos of the beer in a glass is you get a great visual representation of what the beer looks like, so instead of you closing your eyes and trying to envision it, you can actually see it!  Also if you closed your eyes and tried to read the description, that really would not work out too well… Unless you can read braille… but again the computer screen or phone screen is pretty flat….   But I digress.

We should talk about the beer at some point, and what better point then now.  With the appearance, as you can see by the above photo, the pour gives off a nice creamy head.  It lasted a few minutes before dissipating.  The colour is a clean crisp copper colour, which is what is expected from a Session ale.  The can has the words Mid Way on it, as well as a picture of a Goose head.  The table is a white.

Now to the tasting aspect.  Which is usually a key seller on a beer, cause if it doesn’t taste good, then you just drink it faster to get to the next one that may test better.  But the Goose Island Midway ISA is one that you do not have to get through fast.  As expected with Session ales, you get a great flavour kick of tropical fruits / citrus, as well as no harsh after tastes.  It drinks very smooth, and with the 4.6% ABV, it is on the lighter side of beer.  At the end of the flavour profile you get a hint of the hops but nothing extreme.  Just a delicious all around flavour profile.

This just proves that there are so many good beers coming out, and the Session Ales are worth a try.  You get all the flavours as a typical IPA, but not at the extreme ABV (Alcohol by Volume) percentages.

Was the beer hoppy:  Just at the end of the sip, but nothing extreme.

Would you recommend this to a friend:  100% I would, worth a try for sure.

Would you buy a case of it:  Yup I would, no doubt about that.