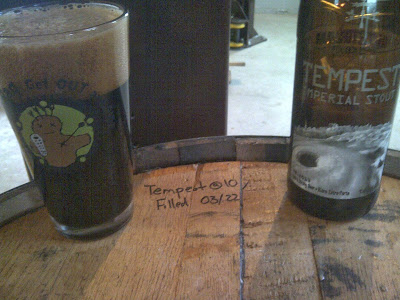 Well yet again it is time for the world famous team van go beer review.  This time we are going to look at the last beer I bought at the LCBO, the Amsterdam Brewery Tempest Imperial Stout. If you think this beer was brewed in the Netherlands you would be sadly disappointed.  This beer is brewed in Toronto, so why it’s not called Toronto Brewery I’m not sure.

This is a stronger beer, at 9% alcohol rating, and is a Fall / Winter seasonal beer. An interesting fact about the Tempest Stout is that its optimum serving temperature is 10 deg C.  So right off the bat I buggered that one up.  Being stored in my car in the nice cold temperatures we had, I’d say the temperature we drank it at was probably closer to 5 deg C….

So let us start with the appearance of the beer.  It comes in a brown bottle, with a label, so it looks like a brown bottle with a label on it.  When you pour the beer into the glass you have a very dark appearance, hence the name “Stout”.  The word stout was originated from a Russian word which stands for “Alcohol which flows from the hills, and into a glass”.  To be honest I have no clue what it stands for…. After the beer was poured into the glass, there was a thick head which didn’t seem to dissipate quickly.

Smell…. The short quick sniffs that I took of this beer gave off a hint of chocolate and roasted malts…. some people smell coffee, raisins and caramel, but I’m thinking they were drinking folgers and eating caramel coated raisins, because I didn’t get those when I smelt the beer. 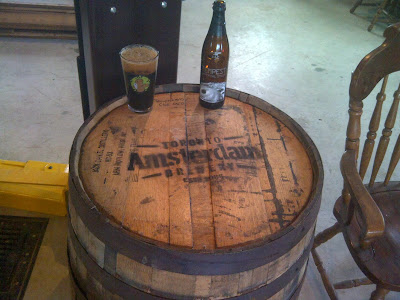 The taste.  If you have ever had a party in your mouth, then you have probably drank this beer.  You did get the taste of chocolate with some bitterness.  At the end of the day the mouthful of the Imperial Stout was fantastic.  For a 9% beer, you did not get the sense you were drinking a high alcohol beverage.  Well until you finished the beer, cause then you notice you were drinking a high alcohol beverage.

Would you buy a case of this beer?  I would and I wouldn’t.  9% is a lot of booze, and you really can only drink 1 bottle at a time….
Was the beer hoppy? Not really hoppy, more bitter and chocolately….
Would you recommend this beer to a friend? Yes… and I did bring one and give it away to a friend.
How much does a 58.6 litre Keg weight? Full = 160 lbs, Empty = 31 lbs