Well I know I’ll probably get some slack over a beer review for something you cannot purchase here in Ontario, but I still have to review it, cause who knows when you are off to Alaska, or the North Western USA.  On our recent trip to Whitehorse, we did the Yukon-White Pass train ride to Skagway Alaska and stopped at a local pub for a pint.  The one that I tried was the Alt Style Amber from Alaskan Brewery. 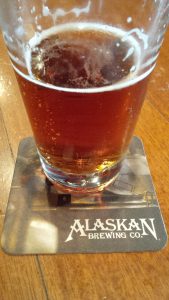 In the grand scheme of things, the alt-style amber is not meant to be a hoppy beer, or anything like that, with an IBU rating of 18.  But there is a really solid flavor profile, which is more indicative to an Amber beer. With the aroma notes of Caramel and maltiness (dont think maltiness is a word) it lends itself to be a good overall pint.  As you can tell by the photo, you see the amber colour with a slight white head to it.

With respect to the flavour, it definitely hits the target of the Alt Style Beer.  There is a hops note, but nothing like you would get in an IPA, but there is something there for sure.  The beer had a medium body to it, which was nice for the day we were having in Skagway.  There was a bit of roasted malt in the taste profile so overall a really good beer profile.

At the end of the day, if you find an Alaskan brewery beer, pick it up and give it a shot, it is worth it for sure.

Would you buy this beer again:  yup for sure.

Would you recommend it to a friend:  yup again for sure.

Was the beer hoppy:  not too bad, slight hop note but overall good.

What is the capital of Alaska:  Juneau